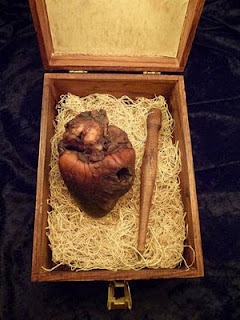 "We bring you the mummified heart of the vampire Auguste Delagrange. Before his destruction in 1912 Delagrange was responsible for the deaths of over forty people during one of the worst outbreaks of vampirism in the United States. He was eventually identified and hunted down by a Roman Catholic priest and a Voodoo Hougan. The pair began systematically destroying nests and minions, forcing Delagrange to take refuge in an abandoned farmhouse on the outskirts of a small town in Louisiana. It was there that a stake was driven through his heart and his body destroyed, consigning his soul to it's inevitable end. All that remains is the heart you see before you.

The vampire's dessicated heart and the stake that destroyed him are stored in a box of finger jointed oak that measures approximately 5" high, 8" wide, and 11" long. The plaque on top of the box notes the day Delagrange was destroyed and appears to be hand lettered, consistent with the time period.